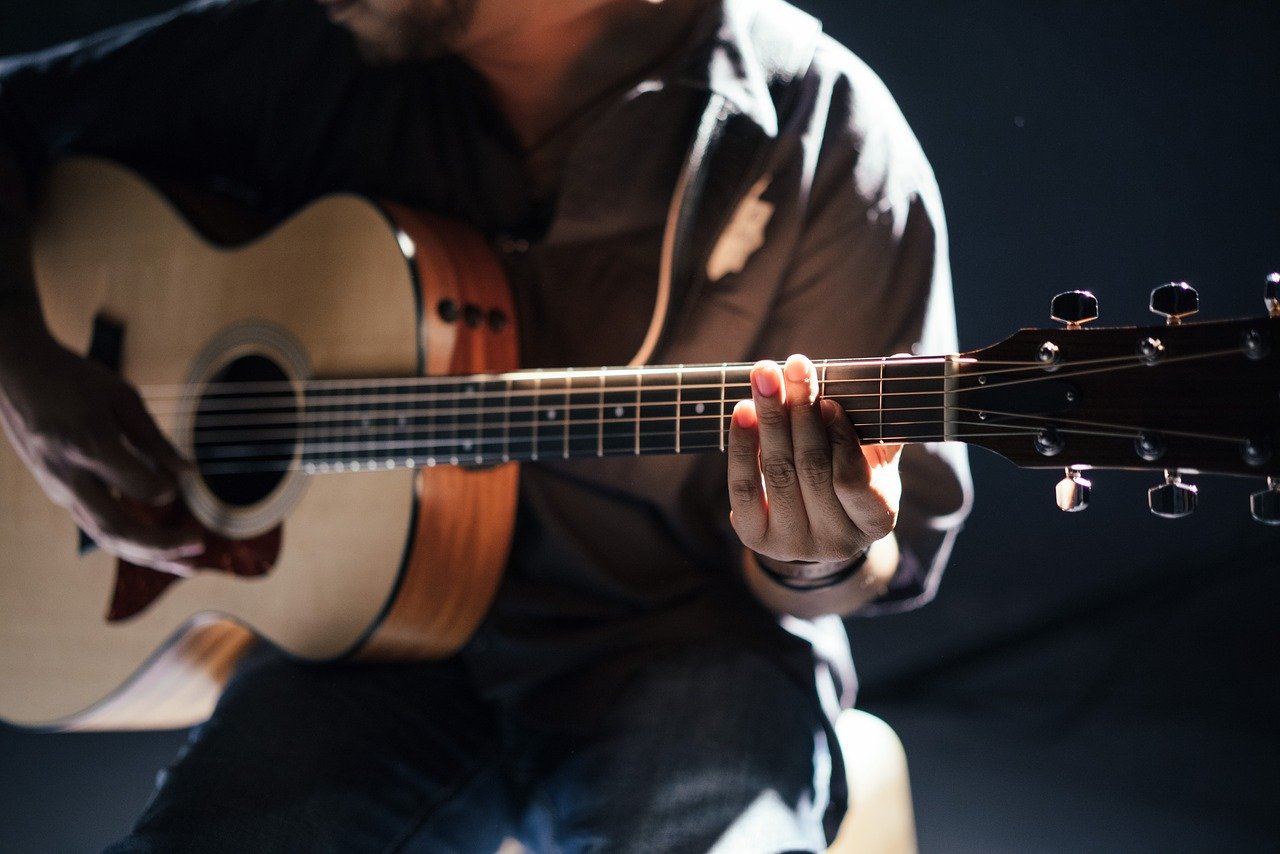 Learning to play is a most reliable source of pleasure.

A few year ago I went to a party, a small gathering of friends at someone’s house. Late into the night, a fellow party-goer played acoustic guitar, sang songs, and practically ruined the whole evening.

If I was being generous, I’d say his repertoire was retro. He started with a rendition of George Michael’s Faith, a really rather ironic and punchy version that got us all clapping and nodding with approval. An hour later, after a second performance of that customary acoustic anthem, Extreme’s More Than Words, the magic had well and truly died.

And yet, if truth be told, if I had my way I’d be that person with the musical instrument, serenading the soirée with my soppy Simon and Garfunkel cover versions, leading a kooky sing-song under a beatnik moon.

In a complex world, making music is a simple pleasure.

I should perhaps explain that ever since I learnt to play the guitar in my early twenties, I’ve daydreamed of impromptu, provincial stardom. My daydream goes like this: I’m at a school reunion or a birthday dinner or a funeral. By chance there is a guitar collecting dust in the corner. Someone asks about a musician in the vicinity, to which I bashfully raise my hand before wooing the audience with a series of delightful lullabies. “I didn’t even know he played,” they whisper, feeling relaxed, blithe and a little bit tear-jerked.

My daydream will never happen. To be honest, I don’t even want it to. If it ever did it would surely be a rotten bouquet of disappointment, spoiled by a fog of nerves and misgivings. I’ve known for a long time that I’m not a performer and that I don’t possess any charisma as a musician — or if I do, then it’s a type of charisma ruined by the vinegar of self-consciousness.

I think the real substance of my daydream is in wishing to demonstrate the long and healthy relationship I’ve had with my guitar for the past two decades. I suppose I’d like to recommend it to others as a benevolent option they might take in life. “It will make you happier,” I might insist, with the advice, “Look, you’ve just got to pluck this string and it makes a noise.” In a complex world, making music is a simple pleasure.

I was delighted to reach this level of musicianship.

Learning the guitar took me some time because the manner of holding your hands in that particular way is awkward and unnatural. The main reason I persevered was because I had low ambitions in the beginning. All I really wanted to hear was the opening chord of Neil Young’s Heart of Gold, which happens to be an E-minor chord, and that happens to be more or less the easiest chord in the world. You strum it about 6 or 7 times, then switch to a quick D-major chord — that’s a bit harder and took me about a month to get right — before going back to E-minor again. I was delighted to reach this level of musicianship.

It might not have been a guitar: I’ve tried my hand at the flute, the clarinet, the harmonica and the piano. I love music, but music doesn’t rise up naturally in me as it does in other, more talented people. The guitar is the only instrument I’ve made any headway with and can, on occasion, impress myself with.

Still, after twenty years of tinkering, I play only adequately. I’m prone to basic errors and even more prone to forgetting what to play next. Slightly unusual rhythms ruin my performance. Above all, I make the same mistakes across the same dozen songs that I play repeatedly, doggedly.

My point is that once you begin to learn a musical instrument, and crucially, make it past those early stages of ineptitude, you have a project upon which you can work for life. And as soon as you crack even the most rudimentary technique, you are instantly connected with the history of music. This grandiose claim exists more in the imagination rather than reality (I can’t read musical notation, for instance), but I think there is still a grain of truth to it. You learn that one note follows another, and that collections of notes form harmonies, and that all music is made up of these basic building blocks.

For me, the true pleasure of learning a musical instrument has lay not in the mastering but in the sense of camaraderie with the object. One may love one’s own guitar, but for me there is also the pleasure of the conceptual relationship with every guitar in the whole world. Theoretically speaking, I could pick up a guitar anywhere on the planet, in London, New York or Singapore, and play it. Thus, a crucial part of my daydream is that the guitar is found, as it were, abandoned and silent in the corner of the room. It is a chance encounter, a musical accident; with my hands, I am able to bring the forlorn instrument to life.


Categorised in: Point of View, Some thoughts