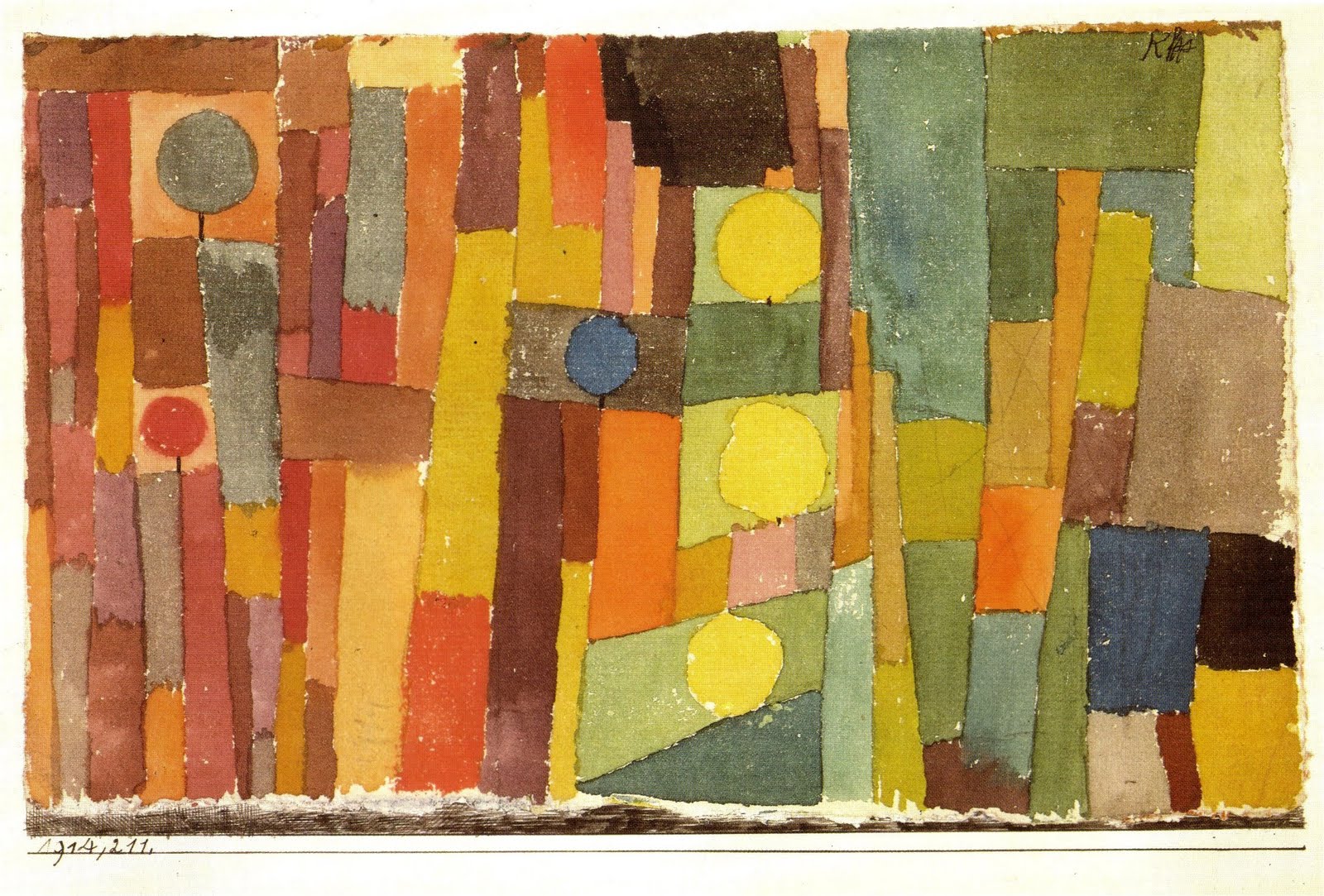 One of my favourite artists is the Swiss-German painter Paul Klee.

In 1914, Klee took a two-week trip to Tunisia, a trip that would profoundly alter the course of his art. The working-holiday would inspire Klee for many years afterwards, and as far ahead as the 1930s he continued to makes paintings that referenced his experiences in Tunisia.

Klee made detailed notes in his diary about the trip, and it is directly from these pages that the impact of the Tunisia experience can be understood.

The journey to Tunisia began on 3 April 1914, when Klee and his friend and travelling companion, the artist Louis Moillet, travelled from Geneva through the countryside of the Rhone and onto Marseille, a full day’s journey that began at two o’clock in the morning and ended at five in the afternoon.

As the train headed southwards, Klee noted how “the little trees covered with red blossoms began, and the roofs became orange-terracotta, enchanting, exactly my favourite shade of orange.”

Klee found Marseille agreeable. “A southern Paris,” he wrote. “Beautiful enough to make you stay.” They went to the harbour and met the third member of the travelling group, the artist August Macke. According to Klee, Macke was “bubbling” with enthusiasm about Marseille. Together they went to a vaudeville show in the evening, before rising the following morning to board their ship.

The Carthage was due to leave at noon; Klee noted with some merriment that his cabin for the crossing had “little receptacles for vomiting, pretty and promising.” He evidently expected to use them since he brought with him a brew of travel medicine given to him by the artist Gabriele Münter. The three travellers made for a happy band, sharing travel sickness pills, smoking and eating together: “Just happy,” Klee wrote. “And how we slept!”

As the boat crossed the Mediterranean, Klee noticed the intensity of colours in the landscape changing, “more glowing and rather darker.” By afternoon they had arrived in Tunis, the capital city of Tunisia. “On shore,” Klee wrote about his first impressions, “very close, our first Arabs. The sun has a dark power. The colourful clarity in shore full of promise. Macke too feels it. We both know that we shall work well here.”

The trio were met at the port by a friend of Moillet, a Swiss man by the name of Dr Jaggi who lived in Tunis with his wife and daughter. To Klee, the doctor seemed strangely alienated by his home in Tunisia, judging that he “yearns for Switzerland… stranger to me than the first Arab beggar.” The group passed the evening on a walking tour of the town, led by the doctor. The following morning, Klee wrote with relish, “My head is full of impressions of last night’s walk. Art — nature — self. Went to work at once and painted in watercolour in the Arab quarter.”

At the time of Klee’s visit, Tunisia was under French occupation. Previously under the possession of the Ottoman Empire, he so-called French protectorate of Tunisia had been established in 1881, and lasted Tunisian independence in 1956.

Living conditions for residents in Tunisia were basic, though the population of the capital had benefited from French construction of a water supply, natural gas and electricity networks. Some streets were cobbled; others laid with sand. Cafés, shops and tradesman occupied simple recesses among the souks, a lively district of market stalls selling rugs, leather goods, ceramics, cosmetics, silverware, jewellery, medicinal plants, books and antiques. Horse and carriage was the main form of transport in towns, though in the capital an electrified tram system had recently been installed. Tunis had large European colonial populations; it’s estimated that half the population was European in origin.

For the next few days, the three artists familiarised themselves with the city, taking the time to paint amid the new surroundings. The days were punctuated with moments of novelty: At one point, Klee and Molliot found themselves as passengers in the car during the doctor’s driving test. At another, they came upon a funeral where the coffin was coloured “blue and gold… a carriage drawn by six mules.”. Later they watched a belly dancing show.

Klee painted as often as possible during his time in Tunisia. On the beach town of St Germain, not far from Tunis, he painted a couple watercolours and was evidently hoping to let the landscape change his output: about the first picture he noted despondently, “could have been painted near Marseilles just as well.” Yet, “in the second, I encountered Africa for the first time.”

On Easter Sunday, Klee swim in the sea and remarked on the “great dignity” of the view across the water. By evening, his intoxication has resumed, spurred on by a full moon rising. “The evening is deep inside me forever,” he wrote. The next few days were taken up with visiting locations within reach of Tunis: the coastal town of Sidi-Bou-Said, the region of Carthage, and the beach resort of Hammamet.

Impressed by the ramparts of the coastal town, and the gardens too, Klee was delighted to find a cemetery splendidly situated by the sea: “I try to paint. The reeds and rushes provide a beautiful rhythm of patches.”

In the evening, the group come across a blind singer and his boy beating a drum in a café, then later, the sound of an oboe and tambourine orchestrating a snake charmer and a scorpion eater. At one point, Klee became transfixed by a girl leading a camel to draw water from a well: “Downright biblical. Had I been alone, I would have stayed for a very long time.”

By now the trio had been in Tunisia for a week. Over the next few days, they took an excursion to the ancient town of Kairouan, a city replete with Islamic architecture and the alleys of the medina. Here Klee would have his most celebrated insight.

The three friends walked part of the journey from Tunis to Kairouan along a railway track. Stopping at an inn along the way for lunch, Klee was hugely bemused by a brood chickens running freely through the halls, a situation made more comic by the proprietor’s inability to contain them. Like schoolboys, Klee noted in his diary, the travellers encouraged the chaos by tossing bread to the chickens and lifting them onto the tables. “Everyone howled and thrashed about with arms and legs,” Klee wrote approvingly.

They returned to the railway and on to Kairouan where Klee resumed his sense of romantic belonging: “Food and intoxication. Scented wood is burning. Home?”

The following day proved momentous for the painter. In the morning he went outside the city to paint the walls and minarets form afar, then return to inside the town to sketch further.

“Colour possesses me,” he wrote. “It will possess me always, I know it. That is the meaning of this happy hour: colour and I are one. I am a painter.”

The day after his colour breakthrough, Klee decided he must be alone. His experiences were “too powerful”. He needed time to regain his senses. He painted outside the town again, and found a small pack with frogs and tortoises in it. Later that day, they journeyed back to Tunis where Klee decided to eat out alone in an Italian restaurant, drinking Chianti — “my secret debauchery.”

Klee left Tunisia the next day, after visiting the market to collect souvenirs to take home. He bought a knife, two leather cushions, rings, an amulet and an old coin. He left Macke and Molliot (“Ma and Mo”) who stayed on in Tunisia. For Klee, “My cart was overloaded, I had to set to work. The big hunt was over. Now I had to unravel.”