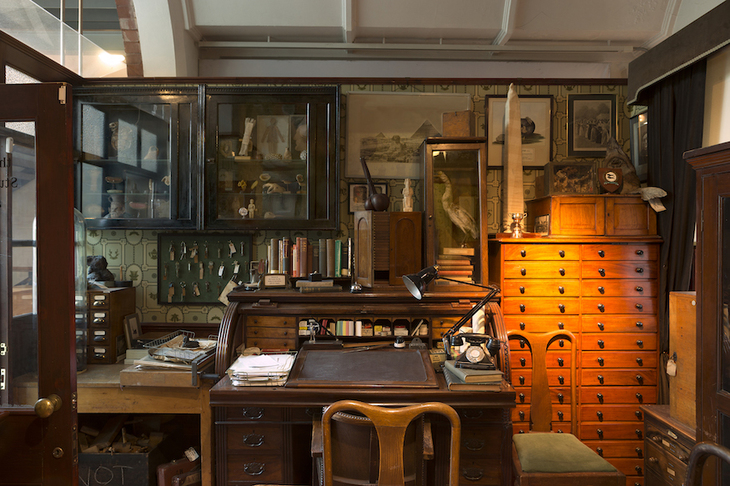 For our modern age – prone to jump to the defence of science, of data-driven evidence – there is something unusually wistful about the art of Mark Dion. Invocations of Victorian adventurers, amateur explorers, cabinets of curiosities and detective stories, lend his work a nostalgic, even fairy-tale air.

I first came across Dion in an exhibition called ‘A Duck for Mr Darwin’, which was part of the celebrations for the 200th anniversary of Charles Darwin’s birth back in 2009. Dion’s work for this exhibition was called Tropical Collectors (pictured above), and consisted of a large dune of golden sand installed in the gallery, on top of which were piled a disarray of scientific equipment and various other paraphernalia, evocative of the Victorian age of scientific amateurism. Positioned like a film-set on this heap sand, you could almost feel the presence of a sailing vessel anchored just off-shore, onto whose deck the belongings of tropical collectors were about to be loaded. The allusions were most readily to adventurism, colonial endeavour, and old-fashioned exploration the likes of which is all but obsolete today.

In an age when we are encouraged to look back over previous centuries with a new level of scrutiny, as a place – perhaps – of aggressive patriarchy, appropriation, white dominance, European imperialism and exploitation, Mark Dion prompts us to occupy a different perspective, to rally our recollections towards aspects of the past that recent paradigms demean as “problematic”.

Dion says: “The way knowledge has evolved is very much segmented and fragmented into societies of experts, so it’s incredibly difficult for an engineer to speak to a physicist, to speak to a chef to speak to an artist. […] there is a kind of nostalgia in me for that moment when these fields of expertise were not so exclusive; there was a more general search for knowledge that could be shared across disciplinary borders. I think amateurs really led a lot of that.”1

One work on show at the Whitechapel Gallery, The Library for the Birds of London, the viewer is presented with a living aviary replete with hopping, skipping birds, who occupy the space with a collection of books on naturalism – should the birds wish to consult their own history. Dion’s conceptual work focuses on the human search of nature, and in doing so, asks us to consider how the notion is not simply a scientific category but is also shaped by explorers, map-makers, hunters, botanists, artists, poets and institutions. The birds inside the aviary cage are, of course, utterly indifferent to the books that cohabit the space with them. Close up of ‘The Library for the Birds of London’, by Mark Dion ‘The Library for the Birds of London’, by Mark Dion

At the heart of Dion’s work is the activity of gathering and ordering. Inasmuch as collating information is the modus operandi of all scientific enquiry, so there is an interesting cross-over with the gathering of objects and their arrangement in art, these days more-or-less confirmed as the preferred method for making contemporary art. The cross-over provides Dion with a unique prism, conflating the activities of the artist, as curator of found objects, with the activities of the scientist.

In present-day thinking, it is assumed that no ideal dialogue exists between viewer and art object. (It has been recognised by art scholars that the development of perspective in the European painting tradition led to the convention that the visible field converges on the eye of the viewer. The effect was to situate the viewer in a privileged position as if the world displayed within the painting had been arranged for the express advantage of the beholder. Thus stated, the convergence of the painted scene upon the viewer’s eye bestowed upon the viewer an ideal status.) Art is now concerned with the process of making without the intention of organising the world into perfect forms. In short, the art world has accepted the political premise that the world and its processes organise us, not the other way around.

Dion reminds us that such thinking – such cause and effect – has not always been the norm. His interest in how the stories and reputations of naturalists and collectors of the 19th century have helped shape our perspective of nature, and more broadly, the practice of making sense of our world.

Increasingly, as the single art object is supplanted by works which cite formation – the gathering, sorting, collating, patterning, and decaying of material – as the principle means to construct a work, so the view of art as an exercise directed towards a final, completed result is marginalized. 19th century science, from Alexander von Humboldt to Charles Darwin, contributed to the destabilising of our result-focused view of the world, an approach to science that could account for the diversity of the physical world. Above all, evolutionary theory indicates how conditional the variants in nature are, and how the process of evolution obeys not a law of purposefulness but of contingency.

Moreover, a little reflection reveals that the concepts of Darwinian thought and the parameters through which we experience art are intimately related. Darwin’s ideas give us a core paradigm of art history and museological structure in general. The vast majority of museums that house our artistic heritage present their collections in terms of evolutionary development. In this format, every specimen is treated as a point on a line of evolutionary progress, and the visitor’s experience is understood as a simulated passage through historical time. Artistic advancement is viewed as a process of mutations, with each new style leading to the relative obsolescence of the previous one.