Review of ‘The Human Document: The Photography of Persuasion from 1930s America to Present Day’ at Mead Gallery, Coventry 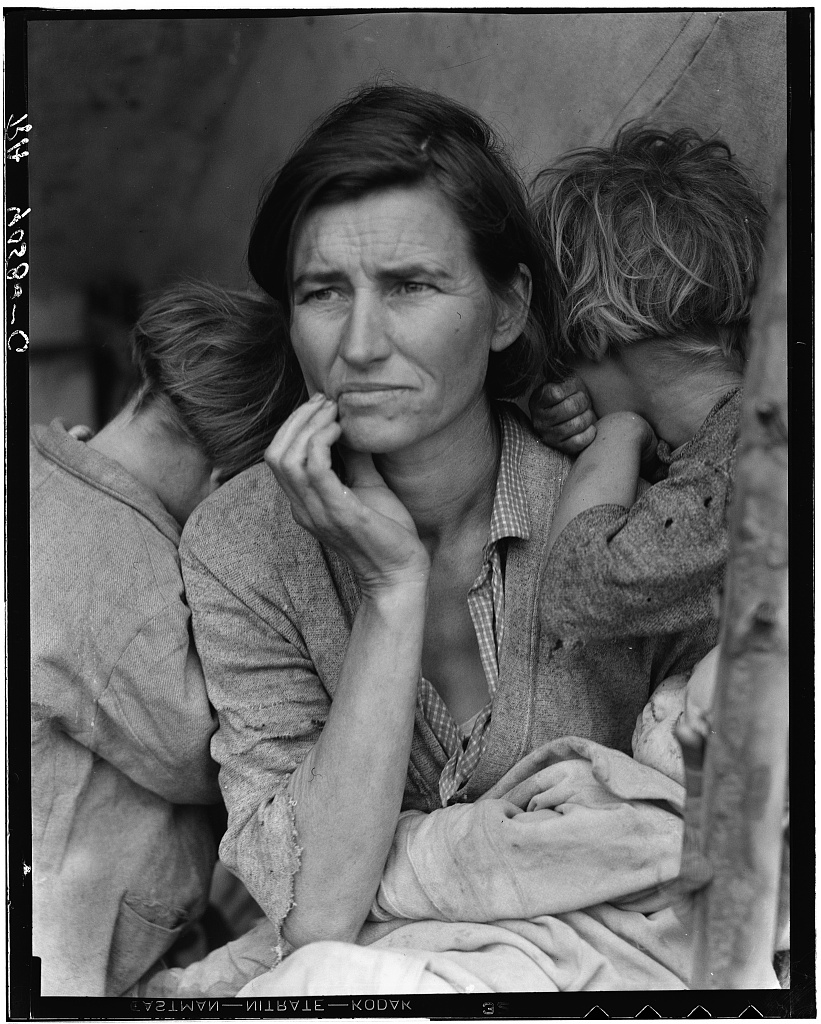 There are few social-documentary photographs more well known, nor more heavily plundered for significance, than those of rural America from the era of the Great Depression. Black-and-white shots of sharecroppers, cotton pickers and economic refugees from the deep-south, the photographs contained in this exhibition have become part of a sort of American folklore, a complex heritage that has engaged sociologists, art historians and critical theorists in broad scope. In the 1930s, the original selection of images were widely disseminated across the US through travelling exhibitions and in picture magazines such as Life and Look. The 200 or so images on display here are small – a surprising choice but perhaps practical given their number – and cover half the gallery space. The core group of photographers, of which Walker Evans and Dorothea Lange are the most well known, also included Jack Delano, Russell Lee, Ben Shahn, and John Collier.

The propagandist angle was to underline the government’s New Deal programme which sought, amongst other things, to introduce a rural rehabilitation scheme through the Farm Security Administration Programme (the FSA), under whose auspices the photos were taken. From 1935 to 1944, a small group of photographers employed by the FSA were sent to the south-west in order to capture the conditions of destitute farming families, and to share their plight with the rest of the country.

Since that time, the numerous theorists who have poured over these images have shaped a new lexicon for how we talk and think about photography. The images themselves have been transformed into exemplars of the voyeuristic or discriminating ‘gaze’. Such a reading exposes the objectification – even commodification – of the farmers and their families by, it is argued, depicting them as marginalised, doomed and helpless. In this way, the FSA works have not only been subject to an uncommon degree of scrutiny, but have also served as a sort of laboratory animal for critical thinkers to experiment their initiatives upon.

For a flavour of the type of writing the FSA images have inspired, this excerpt from Paula Rabinowitz’s 1992 Voyeurism and Social Classes will suffice: ‘Voyeurism and its attendant sadism is at the heart of the documentary narrative that depends on the powers of the gaze to construct meanings for the writer and the reader of “the people”. […] No matter what its political intentions, the documentary narrative invariably returns to the middle class, enlisting the reader in a process of self-recognition.’1

How we now receive and interact with the FSA images is perpetually coloured by the writing of such critics, who help to identify and clarify the way that any photograph can “frame” its subject in the service of those who took it, and for those for whom it was taken.

A fresh look at the images – if that is indeed possible – reveals that the FSA photographs occupy a particular aesthetic space somewhere between artful documentary and formal portraiture. Most of the shots have been purposefully arranged, and even in those which appear more spontaneous, you can still imagine a preparatory conversation having taken place between the photographer and the subject just moments before. In other words, it is obvious that some orchestration is at play.

On show is a visual rendering of poverty, as well as the emotions it is likely to incite. Unlike Victorian portraiture, which many of the compositions evoke, the subjects are not invited to dress up in their best garments. Instead they are expressed within the pitiable motifs of grubby clothing, stark wooden cabins, and bare-footed children with a far-away look in their eyes. The overall ambience is one of muteness, brooding, and loneliness.

In order to consider the historical ripples generated by the FSA portfolio, the second half of the exhibition at the Mead features the work of seven recent photographers working from the 1980s onwards, including Richard Billingham, Chris Killip and Eileen Perrier. Here the display styles change: the images are much larger, a choice that demonstrates more potently the injustice of social depravation. Paul Graham’s Beyond Caring captures the waiting rooms and dole queues of 1980’s Social Security and Unemployment offices across Britain, showing isolated claimants in various manners of dejection. The methodology is clearly more snapshot, palpably candid, a glimpse into a world that is probably far removed from the experiences of the viewer. In these terms, voyeuristic qualities turn into truth-revelation.

Most resonant to the FSA work’s of the first half of the exhibition is the photography of Susan Lipper, whose series Grapevine – named after the small American town where she spent time getting to know the residents and taking their photos – echoes the black-and-white mood of the 1930s shots. Lipper’s declared “collaboration” between photographer and subjects, in which scenes of drinking, hunting and gun wielding are apparently staged – a scenario Lipper described as “poetic fiction” – is designed to resists any forthcoming charges of objectification. Whilst the images repeat some of the motifs of isolation and poverty found in the FSA imagery, there is a playful quality on show here too which, if I can put it this way, one can relax with. With Lipper’s work, the dynamic offered through comparison with the FSA is at it’s most rewarding.