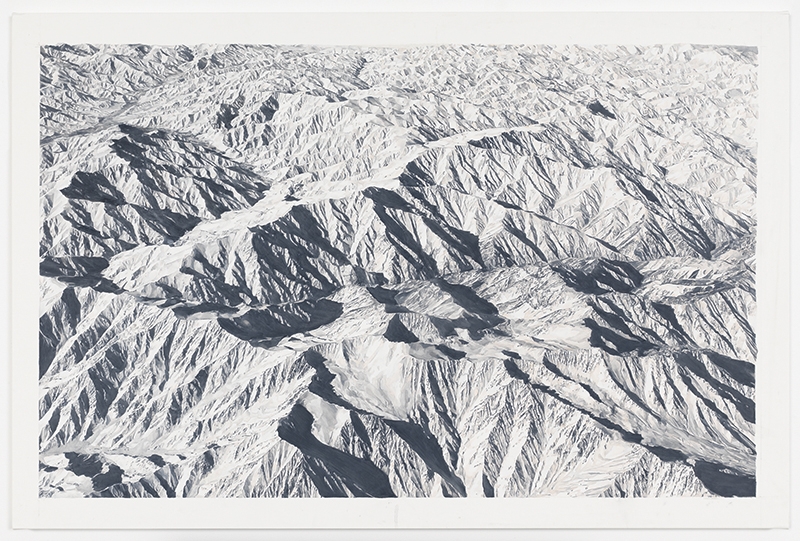 The appeal of Toba Khedoori’s work lies, perhaps, in the enigmatic precision with which her images are made. It lends them the virtue of high-draughtsmanship. But it is a draughtsmanship that left unfinished, deliberately so. The depiction of a broad vocabulary of architectural and organic forms floating in grey mono-space is fragmentary. The large sheets of waxed-paper she uses are left to behave a paper does, folding, tearing, accumulating foot prints and grime at their outer edges.

Despite this attrition, her paintings survive the act of depiction. Now tacked to the gallery wall without the provision of frame or glass, they exist as specimens of her own personal act of pinning down. These are dislocated scenes, wreckage of the real world lacking any structural bond to anything else. They are the depictions of psychological solitude in the face of life, which given its final act, is always cruel.

How do I remain, within this cool landscape which erodes and hardens me?

This call, which reckons with the heart of human obligation, the obligation to survive and overcome, and which leaves a catastrophic mark on the bearer, indicates how death hovers over us and puts everything into isolation.

Khedoori’s central device is to provide the bare minimum of material for the spectator. Despite their detail, the works are full of empty space. The presentation, without the enclosure of a frame or the protection of glass, is barren. And the items depicted themselves are only half-objects, unrelated to any context or setting, incomplete.

From this dislocation, a type of floating, it is clear that the works have something to do with memory. A house lived in, a window in a room, a brick wall in a playground played against, a journey taken to a theatre or a cinema. In the recollection, all extraneous elements are brushed away, as if the whole landscape has all but fallen in the sea. The simple, unitary detail is left, the focus of the memory, which stands like a marker of how we experience ourselves, how we are able to indentify ourselves. I am a figure of solitude in a landscape not of my choosing. It is a harsh, corrosive landscape, but this memory stands as a testament to my enduring identity.

Death, then, is alluded to not as the end point of an individual existence, but as a state concurrent with life, experiential to the living, a sort of convulsive panic which finds resolution in memory. The mind searches, locates a true image deep in the personal repertoire, and purifies it for the sake of something sacred and permanent. Khedoori’s work are symbols of that act undertaken by all of us.