How to Read Paintings: At the Moulin Rouge by Toulouse-Lautrec 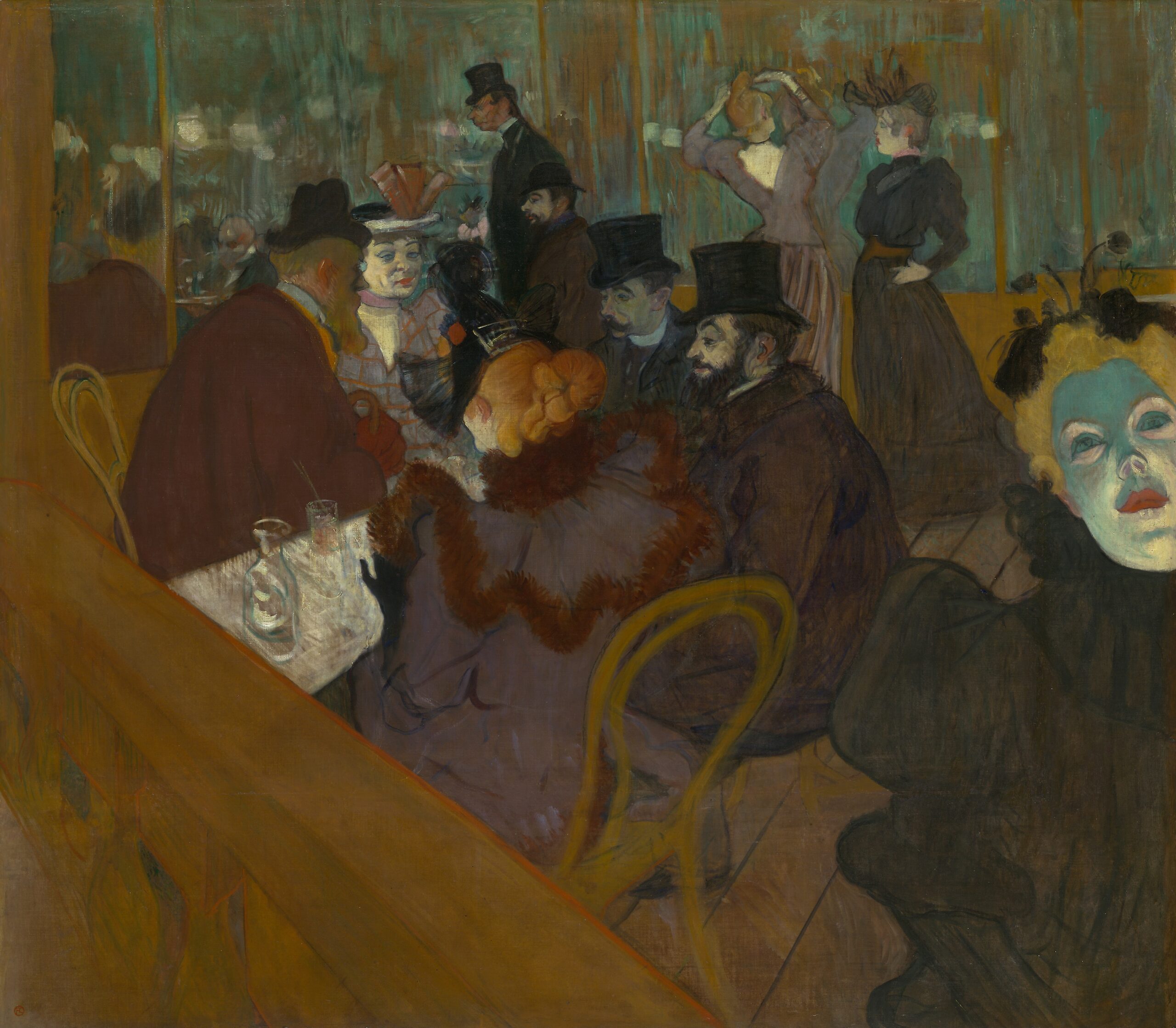 This scene shows a group of friends in the bar of the Moulin Rouge. The figures socialise against a backdrop of preening actresses and shimmering mirrors. As a regular visitor to one of the most famous cabaret establishments in Paris, Henri de Toulouse-Lautrec painted this depiction of his favourite nighttime spot with a tender eye for both the familiar and the strange.

Let’s begin by exploring the composition because it helps us to see how the painting functions, how it draws the viewer in and makes us part of its world.

Let your gaze pass over the image and notice where it is drawn to. My guess it is pulled in the direction of the points of light, firstly to the startling blue-green face of the woman close-up on the right, then afterwards to the wedge of white table visible amid the small crowd in the centre. Then there is the orange bun of a woman’s hair in the very middle, the white-powdered face of the lady just above, and the V-shape area of skin left by the woman’s dress standing behind. These highlights make up a constellation of luminous points like stars in an otherwise dark sky, leading the eye and coaxing the viewer inwards into the fabric of the scene.

Yet none of the movement would be anywhere near as interesting if it wasn’t for the presence of the wooden counter that cuts across the bottom left of the canvas at a severe 45 degree angle. This rather plain section of the painting is also one of its most daring, for it provides an additionalinner frame to the subject matter and helps to channel the viewer’s perspective on its inwards trajectory.

It is at this point, perhaps, that you might begin to consider how irregular the composition actually is, most especially around the question of the subject matter. For it is not at all obvious where the main focus of the work is.

The centre of the painting is taken up with the crowd of five, all friends of Toulouse-Lautrec. There is the writer Édouard Dujardin, next to him is the dancer La Macarona, next along is the photographer Paul Secau with another photographer Maurice Guibert, and at the focal point of the group — the woman with the burnished orange hair — the dancer Jane Avril.

Yet, having been placed in the middle-distance of the painting’s spatial logic, this cohort is hard to treat as the main subject. Far more vivid is the made-up face of the woman on the right, who, with her features severed in two by the edge of the canvas, seems to haunt the action without being central to it.

Let’s look at her a bit more closely. It is in fact a portrait of the English cabaret dancer May Milton. She is the only character in the painting who appears to look at us directly, the only figure who seems aware of being watched. But even then, she is not quite catching our eye but is looking slightly above and beyond us. The odd lighting on her face is produced by a gaslight shining from below: her head is tilted slightly backwards so that the light catches the under contours of her nose, cheeks, and eyebrows —rather like children enjoy to shine a torchupwards from below their chin.

Toulouse-Lautrec was fascinated by the dancers at the Moulin Rouge. He represented them often, and through his caustic but sympathetic depictions, managed to access the subtle meeting point between the performers’ public show and their private realities.

The painting also contains a self-portrait of the artist: Toulouse-Lautrec’s stunted figure is shown in profile at the back. Due to an unknown medical condition, he stood at only five feet tall. He is shown in the centre-left beside his much taller cousin Dr. Gabriel Tapié de Céleyran.

What this painting shows us, then, is a window into the life of the artist, “a gathering of Lautrec’s tribe,” as the critic Robert Hughes put it. It is a world of drink, chatter, music, mirrors and gaslights. It is a celebration of the instability of the moment, where the sense of life and volatility is stitched into the very composition of the work. As if we are on board the tilting deck of a ship, the frame of our experience shifts back and forth, left and right. Yet it isn’t seasickness we feel, but the intimate flow of friends and companions in this notorious place of entertainment.