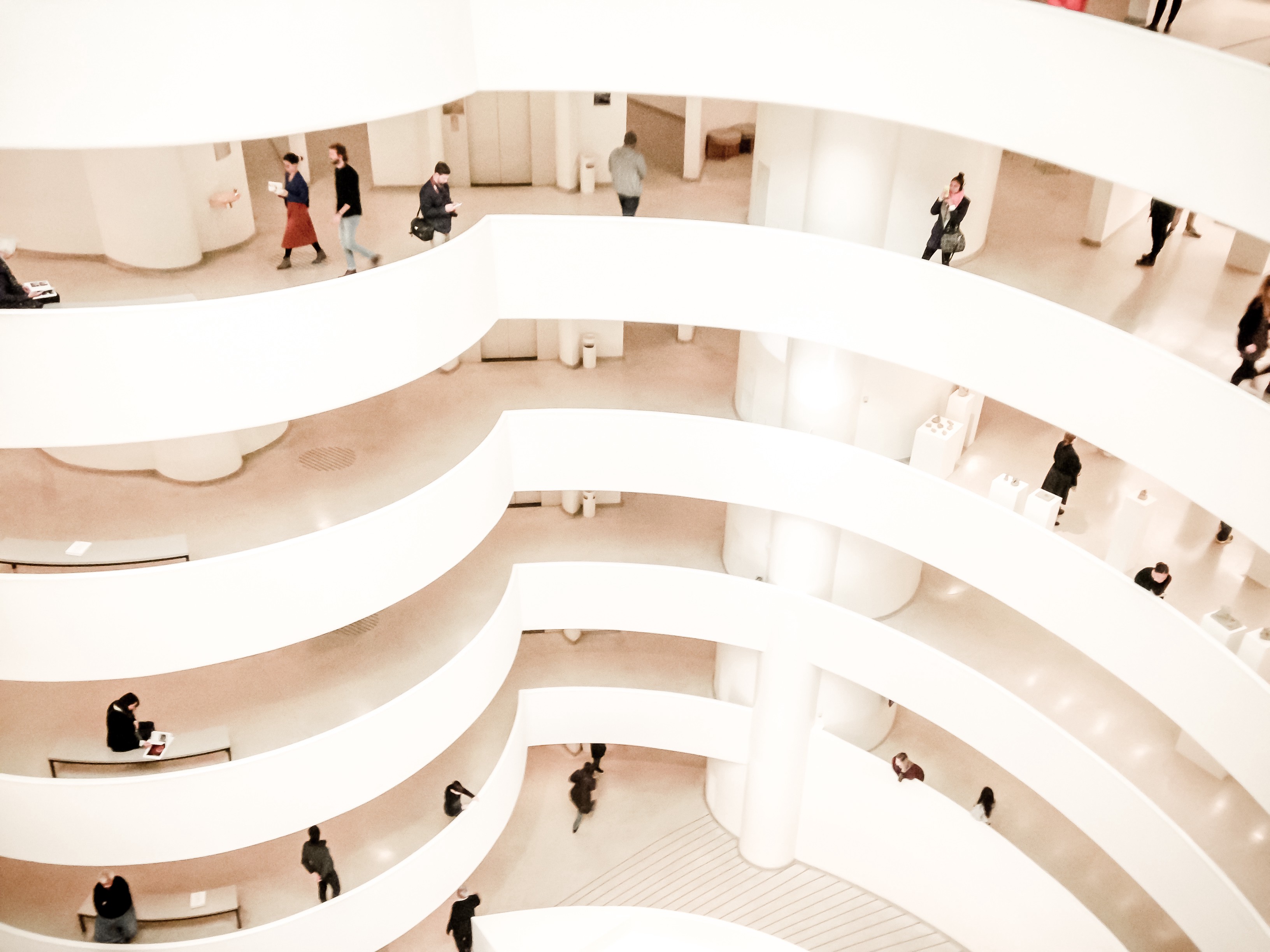 In the Guggenheim, New York, people are throwing down a confetti of paper flyers from the famous curved balconies of the museum. It is Saturday. The museum is crowded because it is six-thirty in the afternoon, when you choose the price of your own admission.

The gallery is brought to a standstill. You pick one up of these paper slips as it lands on the floor and find it’s message is not celebratory one. It’s a fake doctor’s note for the drug OxyContin, a prescription opioid pain reliever.

You wonder what the meaning is. Then people start falling on the ground around you, apparently ill or dying. A sense of crisis fills the gallery.

In 2014, Goldin was prescribed the drug OxyContin for painful tendonitis in her left wrist. She soon became addicted, despite taking the pills as prescribed by her doctor. Goldin performed research and began to piece together evidence of OxyContin’s alleged role in the opioid crisis that has been growing to critical levels in the US over the past 20 years. In 2017, the U.S. Department of Health & Human Services declared a public health emergency and announced a 5-Point Strategy To Combat the Opioid Crisis.

What’s the connection with the Guggenheim museum?

The makers of OxyContin are Purdue Pharma, and the owners of Purdue Pharma are the Sackler family, whose name is associated with some of great art museums across the world.

The Sacklers have a long history of giving to arts institutions. In the Guggenheim, the education center bears the Sackler family name. In the Metropolitan Museum of Art, the wing that houses the ancient Roman Temple of Dendur was made possible by Sackler money.

The extent of their philanthropic donations across the world have few comparisons. The Sackler family has an estimated worth of $13bn, making them the 19th richest family in America, according to a 2016 estimate by Forbes magazine. Many art museums have benefited from decades of Sackler support. But is it set to end?

At the heart of this story – and Goldin’s protest – is a simple question: are wealthy patrons buying themselves a cultural halo by donating to well-regarded museums?

And if arts organisations take money from such sources, are they automatically complicit in sanitizing a sometimes dubious reputation?

Or is it, as many things in life tend to be, more complex than that?

He also died in 1987, years before OxyContin was invented. Moreover, his heirs have not benefited from its sale. Should the Smithsonian Institution rename their museum of art because of the recent scandal?

This example illustrates the intricacy of the question. Nonetheless, the concern about ‘dirty money’ is spreading. National Portrait Gallery in London has, in the last few weeks, dropped a £1m grant from Sackler family in solidarity with Nan Goldin’s Guggenheim protest. The photographer announced that she would withdraw from a planned retrospective of her work at the gallery unless it refused the donation.

Further, at a demonstration as the British Museum recently, protesters invaded the opening event of a new show of Assyrian culture, arguing that the exhibition’s main sponsor, the oil giant BP, had a blemished record of environmental damage and aggressive involvement in the rebuilding of Iraq after the 2003 war. One of the protest’s organisers, Mattina Hiwaizi, said: “We would like the British Museum to drop BP as a sponsor and give a platform to Iraqi voices.”

Money put to good use

One might argue that arts funding from sources like the Sackler family and BP brings about a social good, and therefore we should make a distinction between the source of money and the ends to which it is put. The investment of “truth and beauty” can be an improving force for society; the funding that sits behind it perhaps ought to be seen as the positive force which makes it possible.

Can we really expect to operate in a morally perfect vacuum? Or are artists like Nan Goldin standing in puritanical judgement over museums that, in fact, rely on the generosities of wealthy patrons to deliver a wide range of arts programs which are otherwise starved of money? Perhaps what we are really seeing here is a crisis of confidence on the part of arts institutions in the face of a minority of vocal protesters. Might their stance actually leave the arts under-supported?

The awkward relationship between art and money has a long history. As far back as the Italian Renaissance, Medici family of Florence, and the Borgia and Sforza families, who ruled over the Papal States and Milan respectively, patronized artists to elevate their family’s political authority, erudition and financial dominance. Famous name such as Botticelli, Donatello and Michelangelo were all recipients of money from these families, whose ambitions were served by the magnificence of the art they paid for.

It is an awkward truth, but so much of art history simply wouldn’t exist without the patronage of wealth and power.

Moreover, using the cachet of culture to whiten a reputation is not new either. To give one example, the Swedish philanthropist Alfred Nobel, whose Nobel Prize is regarded as one of the world’s most eminent awards, made his fortune through the invention of dynamite and the manufacturer of cannon and other armaments. It was only after reading an obituary of his life (prepared prior to his death), one that condemned him for profiting from the sales of arms, that he decided to bequeath his fortune for the creation of the Nobel Prize institute.

Alfred Nobel aside, in most cases it is impossible to determine the precise reasons that a company or individual makes a donation to the arts. More and more, the task of galleries is not to determine the motive, but to estimate if the source of money will do more harm than good to the wider standing of the museum.

The dilemma would be made easier if other sources of funding were available. Whilst museum income from ticket sales, private subscription and visitor donations may make a contribution, and the cafe, restaurant and shop do their bit too, many museums continue to rely on private patronage to deliver their full program of events.

The other major area of support is from the state. Certainly it can be argued that arts and culture are socially beneficent forces, and that therefore the state should play a part in their funding.

But government money is always highly fought over. Critics of public support will argue that taxpayers’ money ought to be spent on more pressing needs such as health and children’s education. Moreover, in such contexts, bureaucratic restrictions can mean that arts project funding comes with strings attached.

Crowdfunding and direct donations through social media have, in recent years, have allowed artists to establish a more independent mode of funding that bypasses large companies or ultra-rich families. This direct approach is empowering for the individual, but probably unsuitable for larger museums.

In Britain, there is the The National Lottery Community Fund which distributes over £600m a year to communities across the UK, raised by players of The National Lottery. This method of funding has enabled an enormous number of local arts projects, but critics argue that the funding is based on the morally dubious practice of gambling.

In short, income streams are numerous and diverse, and seemingly fraught with comprise.

Yet there are benefits to a diverse collection of revenues, mainly that any single source is never too dominant. In this scenario, ethical questions can be asked and acted upon without necessarily damaging the overall finances of the institutions.

One commentator, Elizabeth Merritt, writing on behalf of the American Alliance of Museums, agrees, suggesting “that museums should continue to diversify their revenue mix as part of an overall, comprehensive funding strategy”.

I don’t pretend to have any easy answers to these questions. The calibrations at play remain finely balanced. In the art world, moral considerations have to be weighed against pragmatic needs. One thing is for certain: as the number of billionaires in the world grows, the question is unlikely to go away soon.